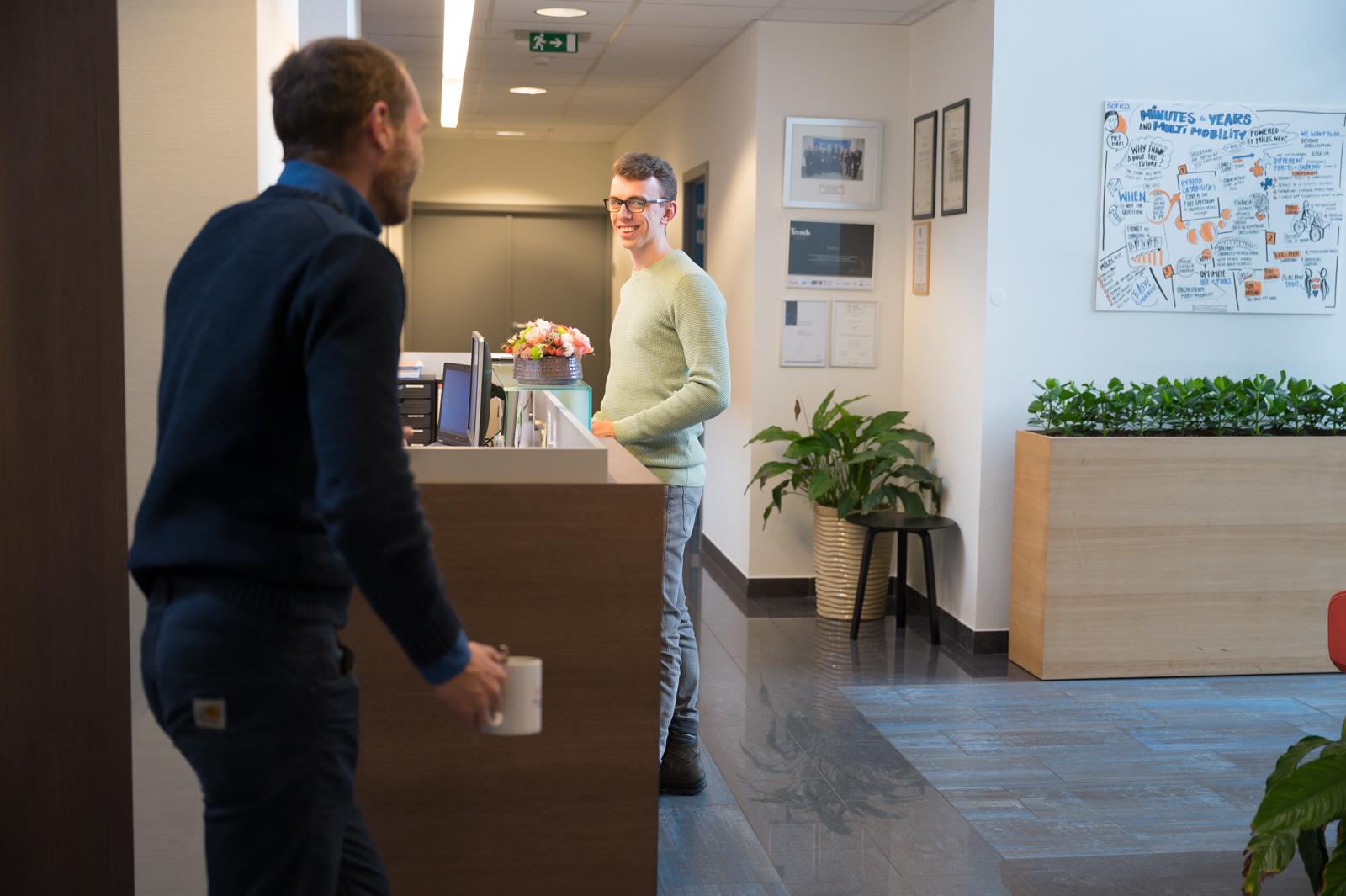 1. How did it all start at Sofico?

That’s quite the story. During my time at College University I made a small application that displayed the available Blue Bike (bike sharing) at the train stations of Ghent. Nothing fancy, but somehow it put me on someone's radar. I got the opportunity to present my app at an event called: Dynacity. The event focused on alternative transportation in the city of Ghent and how to stimulate this. During my presentation it so happened that Bram Wallach (fellow Sofico colleague) was there as well. After the event he contacted me if Sofico would interest me.

I didn’t immediately jump on the opportunity as I was in middle of my last year. In the end I was asked on an interview and not that much later I signed my contract. If it weren’t for Bram Wallach, I probably wouldn’t have started my career here.

2. What does a day at Sofico look like for you?

I don’t start the day with the typical run to the coffee machine (yes, I do have energy throughout the day). To get into the rhythm of the day, I mostly start with following up on stuff I didn't finish the day before. Once that is done, I start programming as I’m a programmer after all. Next to programming I do a little scrum work and wireframe design. If I’m not doing any of the above, you’ll probably find me in a (virtual) meeting room.

3. How is Sofico different from your previous job(s)?

After graduating from College University, I started my career at Sofico. Some say, as a student school is your job. Let’s make a comparison...

The financials are quite different. At Sofico you get paid for what you love to do as previously I had to pay. That is definitely a big improvement. ;)

The people you work with at Sofico genuinely want to bring Sofico (and its products) to the next level. It is safe to say that at my previous ‘job’ not everybody was that motivated. At Sofico every single person wants to get their hands ‘dirty’. Working with people like that, gives you a real motivation boost, as you can see the ongoing progress and vibe.

4. How do you spend your free time?

What I do at Sofico, has been my passion for a very long time now. It’s not uncommon for me to do some programming in my free time to learn new things or continue with personal projects.

What I really like to do is watch tv shows and movies. Since a few months I started spinning in the local gym.  It helps for clearing my head and gets me focused again.

Next to this I really like to get away from the house and just do things, doesn’t really matter what it is.

5. What may we serve you to please you?

As a Belgian I could say: serve me fries and I’m happy. This is true, but what I value a lot are experiences. Experiences together with other people. It’s great to buy yourself new things, but it fades away in the background after a while. This is not the case for things you experience with other people and that were fun to do.

The trips that are organized by our very own Party team are an example of this (big thanks to them for spending their time into organizing all of this).

6. What do you love about your team?

The thing I really like about my team is that it’s very easy to approach one another. We just ask questions all day long to each other. It’s really a ‘start-up like feeling’. Everybody is down to earth and is great to talk to. We work with the team objective in mind. It’s not a one man/woman show.

I like to bake pancakes. If that’s a superpower or not is up to you. My girlfriend appreciates them, so that’s good enough for me.

8. If I would be able to change one thing at Sofico it would be …

Have our very own cook. Wouldn’t that be awesome?

9. What have I learned so far?

The most important thing I’ve learned at Sofico is there are many opportunities, but you just have to grab them. I have tried many things at Sofico by simply just grabbing the opportunity that presented itself. It has brought me to many places from our very own customer event to Avignon to England. If you want to excel and you dare to say yes to the unknown, Sofico can be very rewarding.

10. Which colleagues would you like to have a drink with soon? And why?
(this serves as a nomination for the next 10 questions too by the way)

I would say Filip Van Ham. I started my adventure together Filip at Sofico. We both started on the .next project and it’s been quite a ride since then.